Where the hell is Belize? 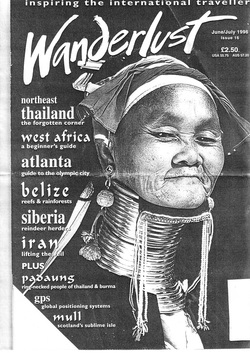 Where the hell is Belize?

A popular t-shirt asks, "Where the hell is Belize?" but nobody knows the answer. It used to be called British Honduras, but nobody knew where that was either. Things are getting better but, even so, only one out of every hundred people who visit Central America spend time in Belize, which is a shame.

I entered Belize aboard one of the dozens of minivans that shuttle tourists from Tikal, Guatemala to Belize City. Both countries are equally poor but you wouldn't know it unless you were a well-prepared professional travel writer who'd done a lot of research beforehand. Or in my case, a totally unprepared writer who'd done no research but happened to be sitting next to a German tourist who had.

Everything changes as you cross the border. The pot-holed dirt road turns into a modest but well-maintained two-lane highway. The slob border guards who demand a bribe not to tear your bags apart become smart, polite immigration officers in crisp, starched uniforms. And the dirty street urchins selling Chicklets and soda pop are transformed into fresh-scrubbed school kids with lively eyes and a spring in their step. It sure doesn't look like a country where the average annual income runs a bit shy of $1,500.

A tiny nation the size of Wales, cut out of the side of Guatemala, with Mexico to the north and the Caribbean Sea to the east, Belize boasts an astonishing variety of flora, fauna and physical geography.

The top half of the country was once a sea bed and is now a dense hardwood forest. The centre is mostly grassy plains and fertile valleys. The southwest is mountainous and rainy while the southern part of the country is a lush, tropical rain forest.

Small as it is, there's plenty of land to go around. There are only 200,000 people in the entire country — a mix of Creoles, Black Caribs, Spanish-speaking Mestizos and Mayans, as well as a few Europeans, East Indians, Chinese and Lebanese. As of yet, no one has told them that ethnic groups are supposed to run around shooting each other, so they tend to get along reasonably well.

Whatever their background, all Belizeans share a relaxed, take-it-easy-Mon friendliness more typical of the Caribbean than Central America. Open a map, look a bit lost and within a minute someone will be asking "Where you goin', Mon? What you be lookin' for?"

I ordered a plate of rice and beans in an inexpensive diner in Belize City. When the pretty young waitress brought me a large platter loaded with rice, beans and a massive portion of tender chicken, I pointed out the mistake.
"Excuse me Miss, I ordered rice and beans."
"Did you think we would not give you meat with your rice and beans?" she answered.
"Gee, no," I said. "Where I come from, if you order rice and beans you get rice and you get beans."
"You in Belize now, Mon," she grinned. "Enjoy your suppah."

Thirty-two years ago, Hurricane Hattie destroyed most of Belize City. Some larger buildings survived and their British colonial design gives the place a bit of a "let's go sip pink gins with Helena Bonham Carter and watch Julian Sands play croquet" atmosphere but, for the most part, it's a shanty town.

Houses and stores are thrown together, waiting for the next big storm to blow them away. Roads are jammed with traffic and lined with open sewers. Home to 70,000 people and covering less than four square miles, it's an overcrowded city in an underpopulated land.

Crime is a problem here. Jobs are scarce, drugs are plentiful, and tourists are seen as easy pickings. Sly looking hustlers sidle up to you in the streets offering everything from taxis and hotels rooms to drugs and women. Some do nothing but follow you to wherever you're going and demand a tip for showing you the way. The guy who tailed me to my hotel started off by claiming to have a brother living on Canada's "south coast" and finished up by threatening to come back with his gang and slit my throat.

If Belize City is dangerous, exciting and crowded, then Belmopan, the capital, is safe, dull as a Mormon wedding, and almost empty. Built from scratch in 1961 after Hurricane Hattie had wiped out Belize City, Belmopan was expected to have a population of 40,000 by 1990. So far, it's about 26,000 short. Of the two, I'll take Belize City any day you care to name.

Back in the early 1980s, a young woman named Sharon Matola got a job cleaning up after the animals on the set of a nature film called Selva Verde. When filming ended, Matola felt that the animals had become too tame to survive in the wild. When the crew packed up and went home, she stayed behind to take care of her animals. After a few years of hard work and some clever pitches for funding (she once walked into Government House with a Boa Constrictor wrapped around her neck) Matola opened the Belize Zoo and Tropical Education Centre.

I'm not a big fan of zoos and I generally think they do more harm than good, but I'd fly to Belize tomorrow to see this one. The zoo looks like a small patch of tropical forest that's been divided up with cages to protect visitors and make sure they don't get lost. The animals are all indigenous to Belize.

Hand-painted signs told me that the Jaguar was born at the zoo in 1984 and doesn't make a habit of attacking humans, the Keel-Billed Toucan is the national bird of Belize, and if I teased the rattlesnake and got bit, the zoo would not help me. "We Macaw Parrots are your natural heritage," said one sign. "Please let us have a future in the wild."

The zoo is at the vanguard of a grass-roots wildlife preservation movement. As well as lobbying the government for more environmental protection, zoo staffers travel to schools to teach youngsters about their natural ecology. It seems to be working. Developers face stiff opposition when they try to drain marshlands to build luxury hotels. And when I told one little girl on a bus that I was heading out to the cayes to see the barrier reef she reminded me not to break the coral because it takes years to grow back.

"Can you swim in this water?"
"Go ahead if you want to," answered Bob, one of two crewmen aboard the fishing boat Miss Conduct.
"Is it safe?"
"You will find out."
"Would you swim in it?"
"No way, Mon."

Belize's 300km barrier reef is the second longest in the world after Australia's. It's the country's number one tourist attraction. Divers from all over the world come to explore underwater coral caves and canyons and swim amongst the eels, stingrays, tarpon, mackerel, flounder, goatfish, angelfish and, further out, barracuda, sailfish and marlin. But you don't have to be a diver to explore the reef, you'll see lots of good stuff with just a mask and snorkel. And despite Bob's attempts to scare me, you're unlikely to be eaten while doing so.

On Caye Caulker I joined four off-duty British soldiers for a day of fishing and snorkelling on the Miss Conduct. Every fisherman on the tiny caye hustles for the tourist business except Miss Conduct's owner Amado Perez, who sits back at the Reef Bar and waits for his repeat and word-of-mouth customers to come to him. Tanned to the bone with sun-bleached, salt-ravaged hair and permanently crinkled eyes from years of reading the sky and the water, Perez could not be taken for anything other than a coastal fisherman.

The tourist season only runs for a few months in the summer and a couple more in winter. Perez spends the rest of the year fishing, tending to his 200 lobster traps, and maintaining his boat. The Miss Conduct is eight years old and by hauling her out of the water twice a year for a complete overhaul, he hopes to get another 30 years out of her. Unless he catches "the big one" and buys his dream boat.

Belize lies midway between Colombia and the south coast of the United States, at the intersection of supply and demand. From time to time, parcels of drugs lost or hurriedly ditched by smugglers drift inland. Like all coastal fishermen, Perez keeps his eyes open for these lucrative packages. He got lucky once, picked up a large bale of marijuana and found a buyer. They made a deal and arranged to meet. Perez turned up with a bale of grass, the buyer turned up with six armed goons. Still, he remains hopeful.
"When I find cocaine," he says. "I'll buy that boat."

We arranged to set off at 9 o'clock and managed to leave by 10:30, which was pretty good going for a place where you tell time with a calendar. Clear of the jetty, we tacked and came about and close-hauled and did a lot more nifty sailor stuff until we had sufficient knots on the clock to drop a couple of lines in the water.

I'd never fished before, but I had seen Rock Hudson and Paula Prentiss in Man's Favorite Sport three times, so no one was surprised when, an hour later, I bagged the only catch of the day, a three and a half foot barracuda. I was, of course, terribly modest about the whole thing.

"Now isn't that the biggest hunk of finned flesh you've ever seen hauled over the side in all your years of sailing," I asked.

"Not quite," Perez answered, as he bashed the poor guy senseless with a socket wrench and tossed him in the cooler. "But it's a decent catch and it'll taste pretty good tonight."

— 30 --
Mark Hill is a Canadian travel writer.
back to travel writing
Powered by