Welcome to the jungle 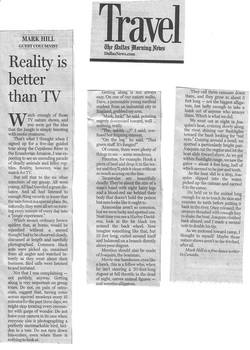 
Welcome to the Jungle
It's nothing like Wild Kingdom, but it's pretty darned good


Watch enough of those TV nature shows and you soon get the idea that the jungle is simply packed to bursting with exotic creatures. Every rock has a snake under it. Every patch of water is home to shoals of flesh-eating killer fish. Danger lurks at every turn.

That's what I thought when I signed up for a five-day guided tour along the Cuyabeno River in the heart of the Ecuadorian Amazon. I was confidently expecting to see an unending parade of deadly animals and killer reptiles. But, as always, reality was no match for TV.

But tell that to the six other members of my group. They were all young. They'd all traveled a great distance. And they'd all listened to enough Sting records to know that the rainforest is a special place. So, naturally, they were all set on turning every minute of every day into a "jungle experience."

Which meant ordinary brown spiders that, at home, would be squashed without a second thought had to be observed closely, discussed at length and carefully photographed. Common black ants were picked up, examined from all angles and watched intently as they went about their business. Bird calls were listened to, imitated and (thanks to one over-equipped young woman in our party) actually tape-recorded and played back at dinner time.

Not that I was complaining — not publicly, anyway. Getting along is very important on these group tours. Do not, on pain of ostracism, suggest that, having come across spider monkeys every fifteen minutes for the past three days, we might stop treating every encounter with open mouths and gasps of wonder. Do not leave your camera in its case when everyone else is photographing a perfectly unremarkable bird, hidden in a tree, too far away to be visible on a snapshot. Do not turn down the loan of a pair of binoculars even when there is nothing to look at.

Getting along is not always as easy as it sounds. Sometimes you really have to bite your tongue. On one of our nature walks, Dave, an otherwise personable young medical student from some industrial city in southern England, grabbed my arm.
"Mark, look!" he said, pointing eagerly downwards towards, well ... nothing, really.
"The , aahhh ...?" I said, confused but feigning interest.
"On the log," he said. "That green stuff. It's fungus!"

Of course, there were plenty of things to see — some quite wondrous things, in fact.

Piranhas, for example. Hook a piece of beef and drop it in the water and they'll pick it clean without so much as a tug on the line. Seven of us spent two hours and the equivalent of a 24-ounce rib-eye steak fishing for piranhas and caught just one.

Tarantulas are beautifully deadly. They're about the size of a man's hand with eight hairy arms and a blood-red sack behind their body that doesn't actually hold the poison but sure looks like it ought to. And they're everywhere, which makes going to the bathroom at night something you really want to think twice about.

Anacondas aren't so common, but we were lucky and spotted one. Want to know what an anaconda looks like? Next time you see a Harley-Davidson parked outside a pool hall or liquor store, take a look at the big fat black tire wrapped around the back wheel. Now imagine something like that, but ten feet long, curled up around itself, and balanced precariously on a tree branch directly above a dugout canoe in which you are sitting.

Mention should also be made of the woodcreeper, a small bird, unremarkable save for a row of sharp spikes growing out of its tail which let it climb trees like a hydro repairman; the strangler tree, an arboreal serial killer that drops its seeds around the base of a large healthy tree and slowly grows up and around its "host" covering it completely until the host tree dies off and only the strangler remains; and Joaquim the boatman.

Movie-star handsome, eyes like a hawk (it was Joaquim who spotted the anaconda), this is a fellow who, when he's not busy steering a twenty-foot dugout canoe at full throttle in the dead of night, navigating only by the vague outline of the trees against the black sky, hauls out a rusty pocket-knife and carves delightful, miniature animal sculptures from chunks of wood. And when he's not doing that, he wrestles alligators.

They call them caimans down there and they grow to about five feet — not the biggest alligators in the world, but hefty enough to take a good chunk out of anyone who gives them a hard time. Which is what we ended up doing.

We went out at night in Joaquim's boat, cruising slowly along the river shining our flashlights towards the bank looking for "red-eyes." Coming around a bend we spotted a particularly bright pair. Joaquim cut the engine, turned in gently and let the boat slide towards the shore. As we got within flashlight range we saw the gator — just under four feet, half of which seemed to be jaw and teeth.

As the boat slid to a stop, Joaquim clamped his flashlight between his teeth, slipped into the water, walked purposefully toward the caiman and picked it up — that's right, picked it up; left hand behind the jaw, right hand midway along the tail — and carried it back to the canoe.

Joaquim held on to the animal long enough for us to touch its skin and examine its teeth before tossing it back in the river. Once released, the beast thrashed about the water with enough fury to actually shake the boat before disappearing below the surface. Joaquim climbed back aboard and I made a mental note to double his tip.

As we motored back towards camp, I thought to myself: maybe those nature shows aren't so far-fetched, after all.