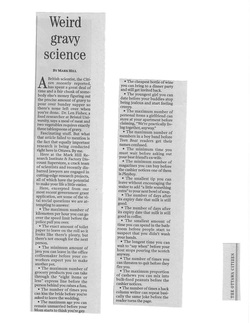 According to an article in this newspaper, a British scientist has been spending a great deal of his time and a fair chunk of somebody else's money figuring out the precise amount of gravy to pour over Sunday supper so there's none left over when you're done. ("Scientists uncover secret to the perfect Sunday dinner" Dec. 2, and "Gravy train" Dec.6)

Dr. Len "Lenny the Scientist" Fisher, a food researcher at Bristol University (motto: "Proudly serving those students who couldn't quite make it into Carleton"), says a meal of meat and two vegetables requires exactly three large tablespoons of gravy.

Fascinating stuff. But what that article failed to mention is the fact that similar, high quality, socially relevant research is being conducted right here in Canada. Right here in Ottawa. By me.

That's right. Here at the Mark Hill Research Institute & Factory Discount Superstore, yours truly and a crack team of scientists, academics, and recently disbarred lawyers are today engaged in an exciting series of cutting-edge research projects all of which have the potential to make your life just a little easier.

Here (carefully cut and pasted from our most recent government grant application) are some of the pressing social questions we are now attempting to answer: