TV shows can only improve 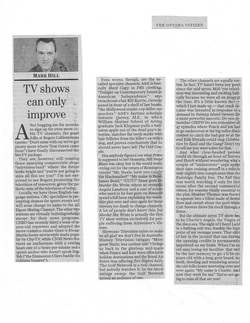 
TV shows can only improve


After begging me for months to sign up for even more cable TV channels, the good folks at Rogers Cablesystems (motto: "Don't mess with us; we've got plenty more where Tom Green came from") have finally disconnected the Me-TV package.

They are, however, still running those annoying commercials about "television-land" where the future looks bright and "you're not going to miss all this are you?"

Locally, we have three English-language stations. CBC specializes in pre-empting dramas for sports events and will soon change its name to the All Figure Skating Channel. The other two stations are virtually indistinguishable except for their news programs. CHRO has recently hired a team of 12-year-old reporters and adopted the more-camera-shake-than-a-Dean-Martin-home-movie style made popular by City-TV, while CJOH News features an anchorman with a resting heart-rate of 12 beats-per-minute and a sports anchor who doesn't speak English ("the Emmontun Ullers baddle the Oddawa Senners").

A&E's daytime schedule features Quincy, M.E., in which William Shatner School of Acting graduate Jack Klugman pulls a half eaten apple out of the dead guy's intestine, matches the teeth marks with hair follicles from the killer's ex-wife's dog, and proves conclusively that he should never have left The Odd Couple.

Has anybody figured out what Prime is supposed to be? Honestly, Hill Street Blues was okay, but is the world really crying out for the return of Remington Steele?
"Mr. Steele, have you caught the blackmailer?"
"My name is Bond. James Bond"
"CUT!"

Same goes for Murder She Wrote, where an overpaid Angela Lansbury and a cast of geriatric actors who used to be bad guys on Banacek spend a full hour explaining the wafer-thin plot over and over again for those viewers too dumb to change channels.

A lot of people don't know this, but Murder She Wrote is actually the first TV show written exclusively for people suffering from Alzheimer's disease.

Showcase Television exists to make us all glad we don't live in Australia.

The other channels are equally rotten. In fact, TV hasn't been any good since the mid 1970s.

Mid-'70s television was interesting and exciting basically because we were all on drugs at the time. It's a little known fact — which I just made up — that crack cocaine was invented in response to demand by Fantasy Island viewers for a more powerful narcotic.

Do you remember CHIPS? Do you remember all 47 episodes where Ponch and Jon had to go undercover at the big roller disco contest to catch the bad guy so at the end Erik Estrada could sing Celebration by Kool and the Gang? Don't try to tell me you were sober for that.

And what clear-headed person could sit through an hour of Starsky and Hutch without wondering why a couple of "undercover" cops spent their days cruising around in a vehicle only slightly less conspicuous than the Partridge Family bus.

The Fall Guy was worth watching if only for that scene after the second commercial where, for reasons vitally essential to the plot, Heather Thomas was forced to squeeze into a bikini made of dental floss and cavort about the pool while Colt Seevers drove his truck through a fence.

But the ultimate 1970s TV show has to be Charlie's Angels — the Viagra of the disco era. The sight of Cheryl Ladd in a bathing suit was, frankly, the high point of my teenage years. That shot of her in the jacuzzi that ran during the opening credits is permanently imprinted on my brain.

When I'm an old man losing my faculties that will be the last memory to go. I'll be 110-years-old with a long grey beard, no teeth, drooling, and wandering around the old-folks home muttering, over and over again: "My name is Charlie. And now they work for me."

You're not going to miss all that are you?