This piece is really boring 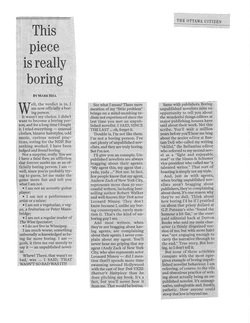 This piece is really boring


Well, the verdict is in. The judgment is final. I am now officially a boring person.

It wasn’t my choice. I didn’t want to become a boring person, and for a long time I fought it. I tried everything — unusual clothes, bizarre hairstyles, odd music, curious sexual practices, voting for the NDP. But nothing worked. I have been judged and found boring.

Not a surprise, really. You see I have a fatal flaw, an affliction that forever marks me as an officially boring person. I am ... well, since you’re probably trying to guess, let me make the game more fun and tell you what I am not.

I am much worse, something universally acknowledged as being far more boring. I am — gosh, it tires me out merely to say it — I am an unpublished novelist.

Whew! There, that wasn’t so bad, was ... I SAID, THAT WASN’T SO BAD WAS IT!!!??? See what I mean? There mere mention of my “little problem” brings on waves of mind-numbing tedium not experienced since the last time you met an unpublished novelist. I SAID, SINCE THE LAST ... oh, forget it.

Trouble is, I’m not like them. I’m not a boring person. I’ve met plenty of unpublished novelists and they are truly boring. But I’m not. I’m different.

I’ll give you an example. Unpublished novelists are always bragging about their agents. “My agent this ... .... My agent that ... .... Brag, brag brag. Boast, boast, boast. Yada, yada, yada ....” But not me. In fact, very few people know that my agent, Andrew Zack of New York City, represents more than fifty successful writers including best-selling author Robert Walker and well-known Star Trek actors Leonard Nimoy and John de Lancie. They don’t know because I, unlike my boring counterparts, rarely mention it. That’s the kind of un-boring guy I am.

And most writers, when they’re not bragging about having an agent are complaining about the one they’ve got. But unlike those unpublished authors who give the rest of us a boring name, I never complain about my agent. Not me. No how. You’ll never hear me griping that my agent (Andy Zack of New York City who also represents actor Leonard Nimoy, did I mention that?) spends more time swanning around Hollywood with the cast of Star Trek VXIII: Shatner’s Hairpiece than he does pitching my book. It’s a fact, but you’ll never hear it from me. That would be boring.

Same with publishers. Boring unpublished novelists miss no opportunity to tell you about the wonderful things editors at major publishing houses have said about their work. Not this scribe. I mean, never. You’ll wait a million years before you’ll hear me brag about the senior editor at Bantam Dell who called my writing “skilful,” the Ballantine editor who referred to my second novel as a “light and enjoyable read” or the Simon & Schuster vice president who called me “a talented writer.” That sort of boasting is simply not my style.

And just as with agents, when boring unpublished novelists aren’t bragging about publishers, they’re complaining about them. It’s one reason why they’re so dull. Think about how boring I’d be if I prattled on about that prissy dullard at G.P. Putnam’s who “found the humor a bit flat,” or the overpaid editorial hack at Dutton Books who said my main character (a thinly disguised version of me, but with more hair) was “not engaging enough to carry the narrative through to the end.” True story. But boring, so I don’t tell it.

But none of these activities can compare with the most egregious example of boring unpublished novelist behaviour. I am referring, of course, to the vile and obnoxious practice of writing about actually being an unpublished novelist. It’s unimaginative, unforgivable and, frankly, pathetic. How anyone could stoop that low is quite beyond me.

Ottawa writer Mark Hill is the author of Deep Trouble and The Hogwon Murders, two fine novels you will probably never be given the opportunity to enjoy.
back to HUMOUR
Powered by