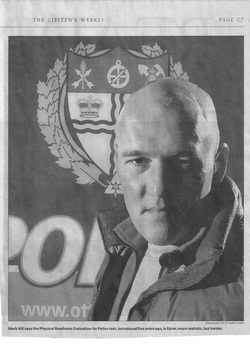 The Oldest Rookie
In which our 41-year-old correspondent takes the police physical and survives the challenge.

Okay, they don't actually shout that at the start of the police physical. But if they had, I would not have been surprised. Standing there with about 50 other aspiring constables in a downtown high school gym, it sure seemed like a Survivor immunity challenge. And at 41, surrounded by hard-bodied young men and buff, sculpted young women, I definitely felt like the oldest member of the tribe.

Now don't get me wrong. I'm no Rupert the Flabby Pirate or chunky monkey Richard Hatch. I'm fit for 41. But the important thing about being fit for 41 isn't that you're fit. It's that you're 41.

The official name of the test is the Physical Readiness Evaluation for Police or PREP. Introduced just five years ago, the PREP was designed to closely approximate the physical aspects of real police work.

The old police test was simple — run a mile-and-a-half as fast you can, do as many push-ups as you're able, and bang out as many sit-ups as your body will allow. It didn't bear much relation to actual policing, it helped reject hundreds of fit, qualified female candidates, and it strongly favoured lean, wiry, running freaks with no body fat. In short, it was the perfect test for guys like me and a major hurdle for everybody else. The PREP test is fairer and more realistic, but, for this applicant, a heck of a lot harder.

There are two parts to the PREP, a Pursuit and Restraint Circuit followed by an Aerobic Shuttle Run. The circuit replicates a foot chase followed by the taking down of an uncooperative suspect. You start with four laps of a 12.5 metre course. On each lap you climb and descend a set of stairs. On the second and fourth lap, you also scale a four-foot wall. You come out of your last lap and approach the Body Control Simulator. Leaning into the machine, you grasp the two handles and push them forward. You're now lifting a 32kg dead weight. Without lowering the weight, you rotate the machine through six 180-degree arcs. Lower the weights and move over to the Arm Restraint Simulator. Grab the handles, apply 14.5kg of grip strength, thus unlocking the machine. Now, lifting a 16kg dead weight, you bring the two handles together and slowly release.

Feeling fine, so far? Good. Now run back to the first machine, but this time grab two ropes and pull, lifting the same 32kg weights while rotating through yet another six arcs. Lower the weights, return to the Arm Restraint Simulator and repeat the previous exercise. Now run over to the Victim Relocation Simulator, a 68kg body dummy. Grasp the "victim's" arms, drag him 7.5 metres, around a pylon, 7.5 metres back, turn him around, put his arms by his side, legs together and you're done.

One more thing. The entire circuit is done while wearing a 4kg weight designed to simulate a police duty belt. It doesn't sound like much. It feels like a lot more. If you're really curious, buy a couple of large fanny packs and stuff a two-litre bottle of water into each one. Strap both packs tight to your waist and go do your usual workout. You'll see what I mean.

Complete the entire circuit in 2 minutes 42 seconds or less and you pass. Do it one second over, and you're toast.

The first person up on deck was a muscle-bound, twenty-something young man with legs like tree trunks and biceps big enough to get Gray Davis recalled. Clearly familiar with the course (many colleges have a Pursuit and Restraint Circuit set up for their Police Foundations students to practice), he sailed through without a hitch save for a sharp admonishment from the moderator to "please take it easy on the equipment." Most of the rest of us had a somewhat different experience.

I breezed through the four laps putting years of hard running to good use and picking up valuable seconds. The push part of the Body Control Simulator also went well as I cashed in a lifetime's worth of morning push-ups. Same deal for the Arm Restraint Simulator. Too easy, I thought. Keep this up and I too might be asked to "take it easy on the equipment."

Well, does pride goeth before a fall, or what? I hit the Body Control Simulator for the second time and suddenly everything fell to pieces. With my heart pumping and adrenalin flowing, my body had kicked into full flight-or-fight reflex mode. Which meant it was taking blood from the non-essential organs and pumping it like mad into my muscles. One of those non-essential organs is the brain, which explains why humans under intense physical stress become really strong, but really dumb.

"Don't cross your legs! Don't cross your legs!," screamed the moderator (the arcs must be performed by shuffling, not crossing the legs). My brain just couldn't process this simple piece of information and I was penalised, forced to complete an additional arc. This caused further panic and I somehow got it into my head that I could make up the time by swinging rapidly through an entire arc, not realising that it's impossible to haul up on a 32kg dead weight when both your feet are off the ground. The weights came slamming down and I was penalised a second additional arc.

By now my respectable performance had degenerated into a last-ditch attempt to snatch victory from the jaws of defeat. I flew through the second arm restraint, ran over to the dummy, grabbed his arms, and hit a wall — lactic acid burn. In a high intensity, high repetition exercise the muscles become starved for oxygen. Lactic acid then flows into the muscles causing a burning sensation and near-complete lack of power. A fifteen second break allows the muscles to recover, but that was fifteen seconds I just didn't have.

How I got that dummy around the pylon and back home is a mystery to me, but I did it. Despite the two-arc penalty, I'd squeaked out a pass with just eight seconds to spare.

There was a ten-minute break before the Aerobic Shuttle Run during which time I drank water and tried to breath. The run sounded simple enough. You run back and forth along a 20 metre lane (roughly the width of a high school gym). At the other side, you wait for a tone, swivel around, and run back. You start at a slow jog, but the tones come faster and faster until you're nearly sprinting. To make the grade, you must perform 55 shuttles in under nine minutes.

If part-one of the PREP simulates a police chase, then part-two simulates a massive gorilla ripping your heart out of your chest with his bare hands. Halfway through I started to berate myself. "You couldn't have a normal mid-life crisis, could you. You couldn't just get a sports car and a teenage girlfriend like everybody else. Nooooo. Not Mark. You've gotta be different. You ..."

Fortunately, reality intervened and I looked side-to-side at the raggedy line of runners and saw one person a full two metres back from the pack — me. I knew then that if I didn't get back in the group right away, I was doomed. I picked up the pace, regained my spot in the line, and thanks to some sort of divine intervention from the patron saint of guys who really want to be cops, managed to hang in to the end.

I'd done it. I felt like last night's death warmed up for today's breakfast, but I'd done it. After 41 years of living and a career which involves little more than pushing buttons on a keyboard, I'd proved that if a bad guy runs I can chase him, I can catch him, and I can take him down.

The test is over now, but there's not much time for resting on my laurels. Like winning Survivor, getting into the police service is a series of challenges. In my case, I've got to pass an analytical thinking examination, a written communications test, a behavioural simulation exercise, a board interview, a background and reference check, a written personality inventory, a psychologist interview, three months at the Police College and a year of on-the-job probation.

On the other hand, at no point will I have to eat bugs.