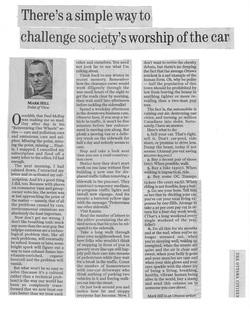 The next morning, I had calmed down. I retracted my letter and re-activated my subscription. And it’s a good thing I did, too. Because, with pieces on public and private mass-transport, the series may at last be approaching the point of the matter — namely, that of all the problems caused by cars, environmental emissions are absolutely the least important.

Now don’t get me wrong. I don’t like breathing toxic muck any more than the next guy. But tailpipe emissions are a technological problem which, like all such problems, will eventually be solved. Sooner or later, some bright spark will figure out a way to turn exhaust fumes into vitamin-enriched, organic broccoli and the problem will vanish.

But what won’t be so easy to solve (because it’s a cultural rather than a technical problem) is the way our world has been completely transformed such that we now treat our cars better than we treat each other and ourselves. You need not look far to see what I’m talking about.

§    Think back to any winter in recent memory. Remember how the clearance crews would work diligently through the wee small hours of the night to get the roads clear by morning, then wait until late-afternoon before tackling the sidewalks?
§    Spend a weekday afternoon in the downtown business core. Observe how if you stop a vehicle in traffic it won't be five minutes before law enforcement is moving you along. But plonk a moving van or a delivery truck on the sidewalk for half a day and nobody seems to care.
§    Stop and take a look next time you see a road construction crew. Notice how they don't start work on one lane without first building a new one for displaced traffic (often removing a sidewalk in the process). They construct temporary medians, re-program traffic lights and install new signage. And for people: a battered yellow sign with the message: "Pedestrians use other sidewalk."
§    Visit Kanata.
§    Read the number of letters to the editor postulating the absurd notion that bicycles be relegated to the sidewalk.
§    Take a long walk through your own neighbourhood. See how folks who wouldn't think of stepping in front of you in a grocery store line-up will happily pull their car into a stream of pedestrians while they wait for a break in the traffic. Count the number of homeowners with one-car driveways who think nothing of parking two vehicles in their laneway and forcing walkers out into the street.
§    Or just look around you and notice how fat and sloppy everyone has become. Now I don’t want to revive the obesity debate. But there’s no denying the fact that the average Ottawa resident is a sad example of the human form. Oh, why be polite — half the population of this town should be prohibited by law from leaving the house in anything tighter or more revealing than a two-man pup tent.

Fact is (and it doesn’t take a 21-day newspaper series to make this point), the automobile is ruining our air, destroying our cities, and turning 30-million Canadians into slobs. Fortunately, I have an answer (Wow! Amazing how that worked out, huh?)

Here’s what to do:

5. Go see your boss. Tell him or her that by ditching your car, you’ve cut your total living expenses by one-fifth. Arrange to take a 20 percent pay cut in return for a four-day work week (that’s a long weekend every single weekend of the year, folks!)

6. Do all this for six months and at the end when you’re no longer stressed out, when you’re sleeping well, waking up energised, when the streets are quiet and the air is clear and sweet, when your belly is gone and your muscles are taut and when your skin glows and your eyes sparkle with the sheer joy of being a living, breathing, healthy, vibrant human being alive in the world, buy a stamp and send this column on to someone you care about.