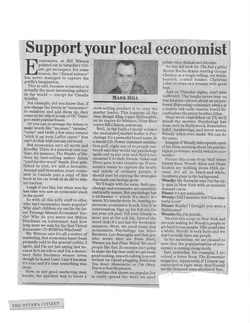 Economists, as Bill Watson pointed out in Saturday's Citizen, get no respect. For some reason, the "dismal science" has never managed to capture the public's imagination.

This is odd, because economics is actually the most interesting subject in the world — except for Claudia Schiffer.

For example, did you know that if you change the letters in "economics" to numbers and add them up, they come to 96, which is one of OC Transpo's most popular buses.

Or you can rearrange the letters to make words like "incomes," monies," "coins" and (with a few extra letters) "stick it up your Laffer curve." You can't do that with just any old word.

But economics isn't all mirth and frivolity. There is a practical side, too.

Take, for instance, The Wealth of Nations by bestselling author Adam "paid-by-the-word" Smith. First published in 1776, it's still a favourite. Around mid-November, every economist in Canada puts a copy of this book in his car trunk as an aid to winter traction.

Laugh if you like, but when was the last time you saw an economist stuck in the snow?

So with all this nifty stuff to offer, why isn't economics more popular? Why don't children cry out for the latest Teenage Mutant Economist Turtle? Why do you never see Milton Friedman on Letterman? And how long must we wait for the first Virtual Economist CD-ROM for Windows?

Mr. Watson says it's all a matter of marketing, that economics hasn't been properly sold to the general public. I agree, and I'm not just saying that because he's an editor and I'm a mercenary little freelance weasel (even though, he is and l am). I say it because it's true and it's time something was done.

Now, as any good marketing man knows, the quickest way to boost a slow-selling product is to copy the market leader. This happens all the time. Burger King copies McDonald's; 20/20 copies 60 Minutes; Tony Blair copies Bill Clinton, and so on.

Well, in the field of social science the undisputed market leader is Psychology. It's a powerful brand name. In a recent, J.D. Power customer satisfaction poll, eight out of ten people surveyed said they would use psychology again and 74 per cent said they'd recommend it to their friends. Siskel and Ebert gave it two thumbs up.

If economics wants to capture the hearts and minds of ordinary people, it should start by copying the strategies that made psychology great.

We'll begin with the name. Both psychology and economics are unwieldy, unfriendly names. But psychology has a nickname — psych. It's short. It's warm. It's touchy-feely. So starting tomorrow, economics is "eck."

Use it in conversation. Sign up for Eck 101. Go see your eck prof. Tell friends to meet you at the eck lab. Spread the word. Eck: it's not just for weekends anymore.

Next we need some pop economists. Psychology has Joyce Brothers, Leo Buscaglia and that guy who wrote Men are From Mars, Women are Just Plain Weird. We need people like that. Economics isn't going to make the big time until we get some goodlooking, smoothtalking pop-eck writers on Oprah plugging Releasing Your Inner Monetarist or I'm Okay, You're a Post-Keynesian.

Daytime chat shows are popular, but to really spread the word we need prime-time dramas and sitcoms.

So this fall look for The Fed, a gritty Steven Bocho drama starring George Clooney as a toughtalking, yet warm-hearted, central banker. Christine Lahti co-stars as a woman with great legs.

And on Thursday nights don't miss Galbraith. The laughs never stop on this hilarious sit-com about an exprofessor dispensing economics advice at a Seattle talk-radio station. David Ricardo plays the prissy brother, Giles.

Once we're established on TV, we'll attack the movies. Psychology has done well in Hollywood. Remember Sybil, Awakenings, and every movie Woody Allen ever made. We can do the same.

Imagine if Woody, who spends most of his films moaning about his psychological problems, would switch to economics. Picture this scene from Wall Street Danny Rose. Woody Allen and Diane Keaton are walking down Fifth Avenue. It's all in black-and-white. Gershwin plays in the background.

Woody: My therapist says I'm the only man in New York with an inelastic demand curve.
Diane: It's not noticeable.
Woody: Did I mention that I'm a masterful lover?
Diane: Really? I thought you were a Malthusian?
Woody: No. I'm Jewish.

We sent this script to New York and are now waiting for Woody's people to get back to our people. This could take a while. Woody is very busy and we don't actually have any people.

In the meantime, we are pleased to note that the popularization of economics is coming along nicely.

Just yesterday, for example, I received a letter from The Economist magazine. Apparently, if I renew my subscription right away, they'll send me the swimsuit issue absolutely free.