Strange statistics you can count on 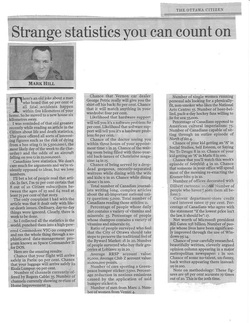 Strange statistics you can count on


There's an old joke about a man who heard that 90 percent of all fatal accidents happen within five kilometres of your home. So he moved to a new house six kilometres away.

I was reminded of that old groaner recently while reading an article in the Citizen about life and death statistics. The piece offered all sorts of interesting figures such as the risk of dying from a bee sting (1 in 5,500,000), the most likely day of the week to die (Saturday) and the odds of an aircraft falling on you (1 in 25,000,000).

Canadians love statistics. We don't care much for arguments and we're firmly opposed to ideas, but we love numbers. So I'll bet a lot of people read that article. In fact, I'm 92 percent certain that 8 out of 10 Citizen subscribers between the ages of 25 and 64 read at least 75 percent of that story.

The only complaint I had with the article was that it dealt only with life or death issues. Ordinary, day-to-day things were ignored. Clearly, there was work to be done.

So I collected all the statistics in the world, punched them into a high-powered Commodore VIC-20 computer and ran the whole thing through a sophisticated data management program known as Space Commander II for DOS.

Here are the amazing results:

·    Chance that your flight will arrive safely in Paris: 90 percent. Chance that your luggage will arrive safely in Kuala Lumpur: 99 percent.
·    Number of channels currently offered by Rogers Cable TV: 35. Number of channels currently showing re-runs of Home Improvement: 34.
·    Chance that Vernon car dealer George Petric really will give you the shirt off his back: 80 percent. Chance that it will match anything in your wardrobe: four percent.
·    Likelihood that hardware support will tell you it's a software problem: 80 percent. Likelihood that software support will tell you it's a hardware problem: 80 percent.
·    Chance of the doctor seeing you within three hours of your appointment time: 1 in 25. Chance of the waiting room being filled with three-year-old back-issues of Chatelaine magazine: 24 in 25.
·    Chance of being served by a drop-dead gorgeous, recently-separated waitress while dining with the wife and kids: 9 in 10. Chance while dining alone: 1 in 100.
·    Percentage of people whose daily diet contains a variety of vitamins and minerals: 45. Percentage of people whose shampoo contains a variety of vitamins and minerals: 65.
·    Ratio of people surveyed who feel that the City of Ottawa should take steps to preserve the traditional feel of the Byward Market: 18 in 20. Number of people surveyed who buy their groceries at Loblaws: 19 in 20.
·    Average RRSP account value: $5,000. Average Club Z account value: 10,000,000 points.
·    Number of cars sporting a Greenpeace bumper sticker 7,500. Percentage reduction in noxious emissions caused by the application of said bumper sticker: 0.
·    Number of men from Mars: 2. Number of women from Venus: 4.
·    Number of single women running personal ads looking for a physically fit, non-smoker who likes the National Arts Centre: 55. Number of beer-bellied, pack-a-day hockey fans willing to lie for sex: 55,000.
·    Percentage of Canadians opposed to American cultural imperialism: 75. Number of Canadians capable of sitting through an entire episode of North of 60: 4.
·    Chance of your kid getting an "A" in Social Studies, Self Esteem, or Saying No To Drugs: 8 in 10. Chance of your kid getting an "A" in Math: 8 in 100.
·    Chance that you'll watch this week's episode of Seinfeld: 4 in 10. Chance that someone in your office will spend most of the morning re-enacting the Kramer-bits: 9 in 10.
·    Number of offices decorated with Dilbert cartoons: 10,000. Number of people who haven't seen them all before: 7.
·    Current department-store credit card interest rates: 17 percent. Percentage of Canadians who agree with the statement "if the lowest price isn't the law, it should be": 17.
·    Net worth of Microsoft president Bill Gates: $39-billion. Number of people whose lives have been significantly improved through the use of Windows 95: 14.
·    Chance of your carefully researched, beautifully written, cleverly argued opinion column appearing in a major metropolitan newspaper: 1 in 100. Chance of some no-talent, un-funny, hack writer appearing there instead: 99 in 100.