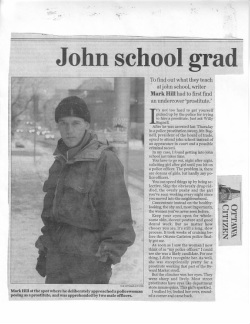 
John school grad
To find out what they teach at john school, reporter Mark Hill had to first find an undercover 'prostitute'


It's not too hard to get yourself picked up by the police for trying to hire a prostitute. It just takes time.

You have to go out, night after night, soliciting girl after girl until you hit on a police officer. The problem is, there are dozens of girls, but hardly any cops.

You can speed things up by being selective. Skip the obviously drug-raddled, the overly pushy and the girl you've seen working every night since you moved into the neighbourhood. Concentrate instead on the healthy looking, the shy and, most importantly, the women you've never seen before. Keep your eyes open for wholesome skin, decent posture and good dental work.

But no matter how choosy you are, it's still a long, slow process. It took weeks of cruising before the Ottawa-Carleton police finally got me.

As soon as I saw the woman I now think of as "my cop," I could see she was a likely candidate. For one thing, I didn't recognize her. As well, she was exceptionally pretty for a hooker working that part of the Byward Market stroll.

But the clincher was her eyes. They were sharp and lively. Most street prostitutes have eyes like department store mannequins. This girl's sparkled.

I walked by, looked her over, rounded a corner and came back.

"Working." Another good clue. A real prostitute would have said "workin'."

"How much have you got?"

I said I had $40. In fact, as I discovered later when the police searched me, I was only carrying $30.

She agreed and asked me to go with her. I turned left, took one step, looked up and, saw them — two men, one young, one old. Cops.

Nineteen of us turned up for the five-hour class at the police training centre at Algonquin College.

They say johns come from all walks of life, but most of our group were middle-aged, married men, from (if appearances can tell you anything) the lower end of the socio-economic spectrum.

Police Sgt. Terry Welsh, a tall guy with a hockey-fan stomach, started the evening by telling us that "what you guys are doing is really pissing people off."

Reading from his instructor's manual, Sgt. Welsh read through a list of terrible things associated with the sex trade, including the fact that, out on the stroll, appearances can be deceiving.

This prompted one member of our merry little band to break in with what would be the first of many heartfelt apologies and confessions. "I'm glad you caught me," the 50-ish man in a drip-dry suit said. "You saved me from a terrible thing."

He went on to say that he'd never seen a prostitute before. But on the night he was picked up, he'd had a fight with his wife, stormed out of the house and sought revenge in the arms of a prostitute.

Throughout the evening, others would tell their tales. The stories varied, but each man was careful to point out that, prior to his arrest, he'd never so much as looked twice at a prostitute.

Our first guest speaker was a lawyer named Mark Morris, who rushed through a quickie guide to the Criminal Code as it pertains to commercial sex.

There were a few surprised looks in the group when he explained that, in Canada, prostitution is not illegal. And there were more than a few confused looks when he went on to say that communicating for the purposes of prostitution is a crime.

It's a summary conviction offence, Mr. Morris said, which carries a maximum penalty of six months in jail or a $2,000 fine. He neglected to mention that in Ottawa the average sentence is about $100, or half the $200 "donation" we had agreed to make for the privilege of attending the john school.

Mr. Morris left and was replaced by a couple of regional public health nurses named Michelle and Katherine who made a pretty standard presentation.

They went through everything from chlamydia to AIDS. Each new horror came with an overhead projection listing symptoms and a series of those grotesque, green-tinted slides that public health nurses always seem to have.

By the time they got to the condom demonstration, you could almost hear the churning of 19 queasy stomachs.

After a short break, Sgt. Welsh told us that our next speaker was "Sara," an ex-prostitute who would tell us some harrowing tales of life on the street. We all braced ourselves for some strong stuff as a nondescript young woman walked up, took out a few sheets of paper and, in a flat monotone reminiscent of a telephone speaking clock, read us the story of her life.

It was a predictable story. Drugs came first, then prostitution. Now, she said, she's trying to put her life back together.

Her revelations from life on the street didn't come as much of a shock. No one looked surprised when she said that prostitutes don't like johns and only have sex with them for the money. Most of the men in the room knew that already.

Drugs and prostitution led Sara further into a life of crime. She took to fraud, petty theft and, eventually, robbery. Her life got faster and faster and more out-of-control until, one day, she found herself serving two-years-less-a-day in prison.

She didn't elaborate, but prison somehow straightened her out. She got off drugs and managed to find a full-time "straight" job.

After a little more reading and a half-hearted admonition to "think about what you're doing," she folded up her papers and left the room.

The next speaker was a woman who claimed to have been a model, but wasn't nearly tall or pretty enough. She told us how her husband had contracted a sexually transmitted disease from a prostitute and passed it on to her. After a gruesome series of surgical operations, she had been left sterile, with mangled fallopian tubes and just one ovary.

Three members of the Hintonburg Community Association took the floor for the last presentation of the night. They were careful to tell us, repeatedly, that Hintonburg was a "wonderful community of decent, hard-working people." But, it seems, there is a drug problem, which they blame on the sex trade.

There is certainly no doubt that drugs are a big part of prostitution. But, unlike Vanier, another neighbourhood with a drug problem, the people of-Hintonburg decided to attack the sex trade in the hope that would eradicate the drugs.

They described a "vicious spiral" whereby prostitutes invade a community, followed by pimps, followed by drug dealers. This leads quickly to crack houses, knife fights and gun battles. The answer, they believe, is to cut off the john supply and "starve out the dealers."

It seemed a bit of a logical stretch to me, but I kept my mouth shut. It had not been made quite clear to us whether we could actually "fail" john school by disagreeing with the message presented. So, not surprisingly, no one did.

Nobody lingered after Sgt. Welsh dismissed the group, but I managed to catch up with a few of the men and get their reactions. All agreed that, at times, it seemed more like a "say no to drugs" meeting than a john school. The police and community associations seemed to blame street prostitution for the drug problem.

He suggested the problems associated with the sex trade came more from the fact that it was illegal than from the business itself.

"If they outlawed potatoes," he said, "You'd have all the same problems. And some bright cop would set up a potato school."