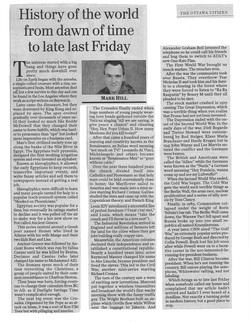 The universe started with a big bang and things have gone pretty much downhill ever since.

Life on Earth began with the amoeba, a single-celled creature with a tiny unsophisticated brain. Most amoebas died off but a few survive to this day and can be found in the Los Angeles area where they work as script-writers on Baywatch.

Later came the dinosaurs, but they were destroyed by King Kong and replaced by apes. The apes evolved gradually over thousands of years until they looked so much like Roddy McDowell that they changed their name to homo habilis, which was harder to pronounce than "ape" but looked more impressive on a business card.

Man's first civilized society rose up along the banks of the Nile River in Egypt. The Egyptians built pyramids, designed the first working irrigation system and even invented an alphabet. Known as hieroglyphics, it allowed the early Egyptians to keep records, transcribe important events, and write funny articles and sell them to newspapers instead of getting a real job.

Hieroglyphics were difficult to learn and many people turned for help to a popular teach-yourself system called "Hooked on Phoenicians."

Egyptian society was popular for a time, but eventually its ratings started to decline and it was pulled off the air to make way for a hot new show on Fox called Ancient Greece. This series centred around a Greek poet named Homer who lived in Athens with his wife Marge and their two kids Bart and Lisa.

Ancient Greece was followed by Ancient Rome which was run by Julius Caesar until he was killed by Brutus, Decimus and Cassius (who later changed his name to Mohammed Ali).

The Romans spent much of their time terrorizing the Christians, a group of people united by their common resemblance to Charlton Heston.

Then Jesus was born, forcing everyone to change their calendars from BC to AD, as if Daylight Savings Time wasn't complicated enough.

The next big event was the Crusades. Organized by the Pope as an attack on Islam, it was a sort of Kon-Tiki Tour but with rape, pillaging and murder.

The Crusades finally ended when huge numbers of young people wearing love beads gathered outside the Vatican singing "All we are saying, is give peace a chance" and chanting "Hey, Hey, Pope Urban II. How many Moslems did, you kill today?"

After that came a hundred years of learning and creativity known as the Renaissance, an Italian word meaning "not much on TV." Leonardo da Vinci, Michelangelo and others became known as "Renaissance Men" or "guys without cable."

Over the next three hundred years the church divided itself into Catholics and Protestants so that holy wars could be held conveniently close to home; the Mayflower sailed to America and was made into a mini-series starring Richard Crenna; Galileo studied the stars and came up with the Copernican theory; and French King Louis XIV introduced a successful line of period furniture ("l'etat c'est moi", said Louis, which means "take the couch and I'll throw in a love seat").

The Industrial Revolution arrived in England and millions of farmers left the land for the cities where they got jobs building really crappy cars.

Meanwhile, the American colonies declared their independence and established a constitutional republic. Nearly a hundred years later, actor Raymond Massey changed his name to Abe Lincoln, became president and freed the slaves. This led to the Civil War, another mini-series starring Richard Crenna.

The turn of the century saw a wave of exciting new inventions. Marconi put together a wireless-transmitter and broadcast the world's first wacky morning show with the funny traffic guy.

The Wright Brothers built an airplane which Orville flew while Wilbur sent the luggage to Jakarta.

And Alexander Graham Bell invented the telephone so he could call his friends and bug them to switch to AT&T's new One-Rate Plan.

After the war, the communists took over Russia. They overthrew Tsar Nicholas II and took him and his family to a clearing in the forest where they were forced to listen to "Ra Ra Rasputin" by Boney M until they all pleaded to be shot.

The stock market crashed in 1929 causing The Great Depression, which was a terrible thing when you realise that Prozac had not yet been invented.

The Depression ended with the onset of the Second World War. During the war, the British and Americans were called the "Allies" while the Germans were known as the "Nazis," a German word meaning "Hey Fraulein, wanna come up and see my Luftwaffe."

As well, huge numbers of Canadians fought on the Allied side. They were so brave that many were given a British girl to take home. These girls became known as "war brides," though today most are referred to as "my first wife."

In the early days of WWII, Dirk Bogarde and Trevor Howard were outnumbered by Rod Steiger, Klaus Maria Brandauer and Hardy Kruger, but in 1941 John Wayne and Lee Marvin entered the conflict and the Germans were beaten.

When the Second World War ended, the Cold War began. The Cold War gave the world such terrible things as the Berlin Wall, the arms race, nuclear proliferation and a series of really silly novels by Tom Clancy.

Finally, in 1989, Communism collapsed under the weight of Boris Yeltsin's bar tab. The Berlin Wall came down, the Warsaw Pact fell apart and Russia broke up into 700 small republics all named Kzuxzizxtstan.

A year later, CNN aired "The Gulf War," an extremely popular series produced by George Bush and directed by Colin Powell. Bush lost his job soon after while Powell went on to a lucrative career in the not-interested-in-running-for-president business.

After the war, Bill Clinton became president. When he's not running the country, Bill enjoys playing the saxophone, Whitewater rafting and not inhaling.

Which brings us to late last Friday when somebody called my house and complained that my column hadn't arrived and hadn't I ever heard of a deadline. Not exactly a turning point in modern history, but a good place to stop.