Abducted by aliens? Now you can prove it. 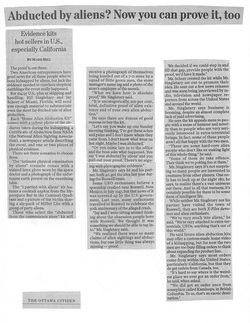 Originally published in
The Ottawa Citizen, The Edmonton Journal & The St Catherines Standard

Abducted by aliens? Now you can prove it.

The proof is out there.

Two American entrepreneurs have good news for all those people who've been kidnapped by aliens, but lack the evidence needed to convince sceptical earthlings that the event really happened.

For $24.95 U.S., plus $5 shipping and handling, Bill Singletary and Jay Schorr of Miami, Florida, will send you enough material to substantiate even the most far-fetched tale of alien abduction.

Each "Home Alien Abduction Kit" comes with a colour photo of the abductee taken during the kidnapping, a Certificate of Abduction from NASA (the National Alien Sighting Association'), a newspaper article describing the event, and one or two pieces of physical evidence.

There are three scenarios to choose from.

§    The "intimate physical examination by aliens" scenario comes with a stained latex glove worn by the space doctor and a photograph of the unfortunate earth person on the examining table.

§    The "I partied with aliens" kit features a cocktail napkin from the Hyperspace Bar in the Centauri Quadrant and a picture of the victim sharing a six-pack of Miller Lite with a group of party aliens.

§    Those who select the "abducted from the convenience store" kit will receive a photograph of themselves being hustled out of a 7-11 store by a squad of little green men, the store manager's name tag and a photo of the store's employee of the month.

"What we have here is absolute proof," Mr. Singletary says. "It is uncategorically, 100 per cent, total, definitive proof of alien existence and of your own alien abduction."

He says there are dozens of good reasons to buy the kit.

"Let's say you wake up one Sunday morning thinking, 'I've got these aches and pains and I don't know where they came from. I don't know what went on last night. Maybe I was abducted.'

"Or you come I late in to the office and the boss asks what happened. You say 'I was abducted by aliens' and you pull out your proof. There's no arguing with photographic evidence."

Mr. Singletary says he and his partner, both 40, got the idea last year during the Roswell craze.

Some UFO enthusiasts believe a spaceship crashed near Roswell, New Mexico, in July 1947, but that news of it was covered up by the U.S. government. Last year, many enthusiasts travelled to Roswell to celebrate the 50th anniversary of the alleged crash.

"Jay and I were sitting around thinking about the obsession people have with Roswell. We thought it was something we should be able to tap into," Mr. Singletary says.

"We realized there were so many claims of alien sightings and abductions, but one little thing was always missing — proof.

"We decided it we could step in and fill that gap, provide people with the proof, we'd have it made."

Mr. Schorr created the kit while Mr. Singletary set out to promote their idea. He sent out a few news releases and was soon being interviewed by radio, television and newspaper reporters from across the United States and around the world.

He says the kit appeals more to people with a sense of humour and novelty than to people who are very seriously interested in extra-terrestrial beings. In fact, some of those people aren't all that happy with the two men.

"There are some hard-core, alien people who don't like us making light of this whole thing," he says. "Some of them do take offence. They think we're poking fun at them."

Mr. Singletary says it's not surprising so many people are interested in creatures from other planets. One only has to look up at the night sky, he says, to realize there's a vast universe out there. And in all that vastness, it's certainly possible for there to be some form of intelligent life.

While neither Mr. Singletary nor his partner have visited the town of Roswell, they are both X-Files devotees and alien enthusiasts.

"We're very much into aliens," he says. "We're very attached to extra-terrestrials, UFOs, anything that's out of this world."

He says future alien abduction kits may offer a custom-made home video of a kidnapping, but for now the two men are too busy filling orders to think about expanding the product line.

Mr. Singletary says most orders come from within the United States, particularly California, but that they do get orders from Canada, too.

"It's hard to say where is the weirdest place we ever got an order from," he said, when asked. "We did get an order once from someplace called Kamloop's, in British Columbia. To us, that's an exotic destination."